From Soma Wiki
Jump to: navigation, search
← Return to Upsilion to Lambda shuttle 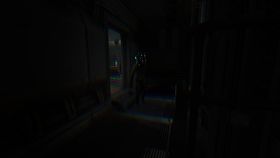 Warning: A new monster will be encountered shortly. This humanoid creature with lights on its head causes more severe vision distortion than other monsters when looking in its direction. Simon can survive taking a hit from this monster, after which it will disappear for a time. Evading it seems to be just a matter of patience: don't look at it and don't wait in its direct path. 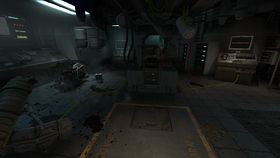 A technical room in Lambda

Note: At this point, the monster will return if Simon heads down the corridor to the right from the shuttle station door and around the corner. If this happens, go ahead and open the door ahead and enter. Alternatively, turn around and backtrack. The creature will leave almost immediately after Simon leaves that part of the corridor, but will wait around if he stays there.

Note: Idling for a while at this point will trigger three or four further moments of conversation.

Note: The room across the hall has a healing node if needed.

Back in the tech room 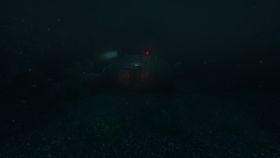 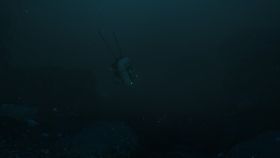 A non-hostile robot who may maneuver alarmingly close

Note: Though this robot will fly extremely close to Simon, it is not hostile and will not attack. It will leave Simon alone when he walks far enough away.